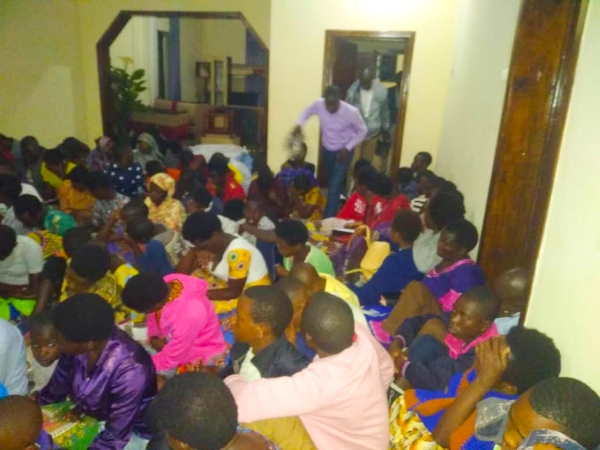 Kigali: Forty-nine people were arrested Rwimiyaga Sector of Nyagatare District for violating the government directives against large gatherings. They were found in two separate homes in Rwimiyaga sector.

At least 45 of them are members of the Seventh Day Adventist (SDA) church, who found in the house of one Flora Mutoni, 40, praying at night.

Chief Inspector of Police (CIP) Hamdun Twizeyimana, the Police spokesperson for the Eastern region, said that at about 9 PM, residents of Gakoma Village in Rwimiyaga, raised concerns about many people, some with vehicles, who had gathered at the home of Mutoni.

“The large movements and sound pollution from the home of Mutoni from where they were singing and praying, prompted the neighbouring residents to call in the Police. Indeed, Police found them including children, congested in the seating room praying,” said CIP Twizeyimana.

He added: “These people breached almost all the directives put in place to contain the pandemic of COVID-19; they were gathered in one place in large number, they did not wash or sanitize their hands before entering, no facemasks and they were compacted in a small room… no social distancing.

They had travelled from different parts of the district including those from Nyagatare and Rwimiyaga sectors. One person infected with the virus could easily infect everyone, who was there, who would in turn further spread it to their respective families and communities.”

All the 45 violators were isolated at Rwimiyaga Police station. The spokesperson thanked the residents for their role in the implementation of the directives to combat the pandemic.

“One person, who violates the directives, could be the source of spread in the whole community, and this is while compliance is a must and sharing information on violators is an individual and collective responsibility.”

He reminded the public to stay within the limits of the directives to supplement the national efforts against the pandemic. (End)