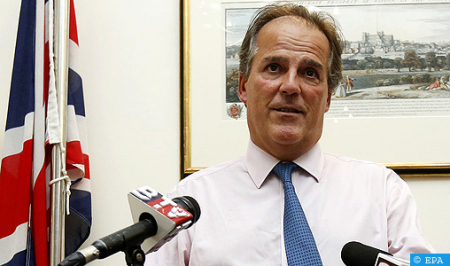 Kigali: The imprescriptible responsibility of Algeria in the persistence of the regional dispute over the Moroccan Sahara, the primacy of the Geneva Roundtable process, and the relevance of the Moroccan Initiative for Autonomy as the only solution to the regional dispute, were the main points raised by former British Ministers Mark Field and Derek Conway in the remarks they gave during the Sahara Debate, a citizen-run show broadcast on social media.

Both British officials underlined the fact that Algeria created the “polisario” and continues to provide a political, a financial, a military and a logistical support to it, while delegating to it the sovereignty over part of its territory, in violation of International Humanitarian Law.

Former Minister of State in the Foreign and Commonwealth Office Mark Field recalled Algeria’s responsibility for the humanitarian situation in the Tindouf camps, referring to it as being “awful”.

For both former officials, whose numerous visits to the Maghreb have enabled them to develop a considerable knowledge of the region, the roundtable process represents a historic opportunity, as it was able to bring together for the first time the real parties in the dispute. Therefore, they stress the importance of a constructive participation of Algeria in this process.

Conway, in particular, said that Algeria has a “particular responsibility” as the main backer of “polisario” in the search for a solution to the “great sadness” that the population of Tindouf camps endures, and called on it to engage fully in the Geneva roundtable process.

Two roundtable meetings were held in Geneva in December 2018 and in March 2019, bringing together Morocco, Algeria, Mauritania and “polisario”. At the end of the second Geneva roundtable meeting, the participants pledged to meet again in the same format.

In its resolution 2494, the Security Council welcomed the participants’ willingness to remain engaged in the roundtable process, in a spirit of realism and compromise, to ensure a successful outcome.

For both former officials, the one and unique solution to the regional dispute over the Moroccan Sahara is the Moroccan Initiative for Autonomy, of which they praised the relevance and foresight.

This Initiative, stressed Field, is the only solution offering the possibility for the inhabitants of the Moroccan Sahara to manage their economic and their social development by themselves. For his part, Conway believes that this Initiative holds the promise of “a bright future” for the population of the region.

In light of the atmosphere of stability, democracy, and prosperity that prevails in the Southern Provinces of the Kingdom, both officials stated that the reforms launched by His Majesty King Mohammed VI have been successful in establishing a “firm basis” for the future of the population of the Moroccan Sahara.

Conway said that the reforms initiated by His Majesty King Mohammed VI, notably the 2011 Constitution and the adoption of the Family Code in 2004, make Morocco a “beacon” and a haven of democracy and stability, not only in the Maghreb, but in Africa as a whole.

In this context, Conway underlined that the people of the Moroccan Sahara fully enjoy their political, economic and social rights, and highlighted the role of the New Development Model for the Southern Provinces launched by His Majesty King Mohammed VI for the prosperity of the Sahara region.

He thus stressed that for “each one dollar generated in the region, Morocco invests seven dollars in the region”, thereby denying the false allegations propagated by Algeria and the “polisario” of a so-called “plunder” of the resources of the region.

The two former officials agreed on the vitality of local democracy in the Southern Provinces, noting that they recorded a turnout rate of 79% in the first regional elections in the history of the Kingdom, by far the highest rate in Morocco.

Mark Field and Derek Conway made these remarks as part of their participation in the Sahara Debate, a citizen-run broadcast intended as an open, democratic platform for dispassionate, serene analysis on the issue of the Moroccan Sahara. (End)