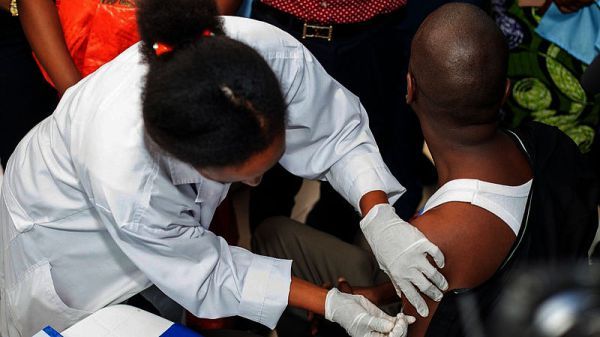 Kigali: The Rwandan Ministry of Health officially launched the Ebola vaccination program -UMURINZI- Unprecedented Movement to drive a Unified Rwandan Initiative for National EBOLAImmunization, as one of Rwanda’s efforts to protect its population against the Ebola Virus Disease.

During this voluntary vaccination campaign, about 200,000 Ebola Vaccine regimens will be given to people who will provide informed consent for the vaccine. The Ebola vaccine will start with Rubavu and Rusizi Districts. The injection will be given to all those who will voluntary accept to be the beneficiaries of the preventive vaccine aged two years and above in two injections.

Following various trials of the Ebola vaccine in different countries, and the World Health Organization’s Strategic Advisory Group of Experts’ recommendations, the Rwanda Food and Drug Authority (Rwanda FDA) granted conditional approval under exceptional emergency for the Janssen’s Ebola vaccine regimen after reviewing the trials made about this vaccine around the world and concluded that this Janssen’ vaccine and found it safe to be given as a preventive measure.

“The joint launching of the Ebola vaccination campaign in the Republic of Rwanda and the Democratic Republic of Congo marks today an important step in the fight against the Ebola Virus Disease in the two sister countries”, said Dr Diane Gashumba, the Rwanda Minister of Health. “We are very grateful to Johnsons & Johnsons for the donation of the 200,000 doses of Ad26.ZEBOV, MVA-BN-Filo Ebola vaccine regimen to the Rwandan population. We are also thankful to the Wellcome Trust and the UK Department for International Development (DFID) for their financial contribution towards the successful implementation of this vaccination campaign”.

During the ceremony, some beneficiaries have been provided the Ebola Vaccine at la Grande Barrière’s no man’s land in Rubavu District after their acceptance followed by the information provided during several educative sessions and awareness activities organized in the community. Beneficiaries will be reminded through text messages to get the second injection after 56 days after the first one.

Prof Jean Jacques Muyembe, Director General of the National Institute of Biomedical Research in the Democratic Republic of Congo who was officially representing his Government said:“I am among the 1,300 people who already benefited to this vaccine. On behalf of our Government, weare proud to be part of the official launch of this joint initiative aiming at protecting our communities andwe take this opportunity to commend the efforts from the Rwandan government to prevent the spread of the Ebola virus disease within the region”.

The head of the World Health Organization delegation at the ceremony, Dr Soce Fall, Assistant Director General for Health Emergencies said that: “Rwanda and the Democratic Republic of Congo have become an example to other countries when it comes to a cross border collaboration in implementing the international health regulations”.

Other delegates present at the ceremony included leadership of North Kivu Province in the Democratic Republic of Congo, Dr Kasonde Mwingathe, WHO Country Representative, Gille Dirk from Janssen, Mrs Stacy MeyerJonson from Jonson, the UK Department for International Development (DFID) the Rwanda Western Province, RubavuDistrict as well as security organs.