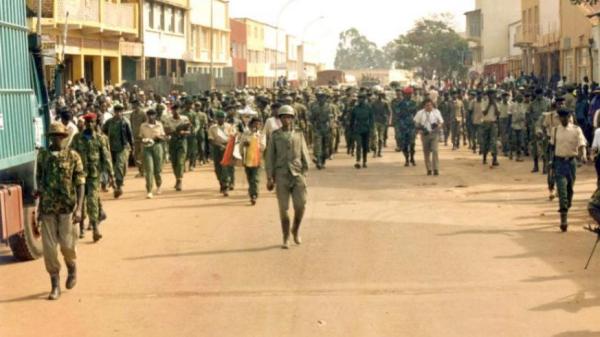 Kigali, 4 July (RNA) – On July 3 and 4, 1994, the RPF-INKOTANYI took control of the cities of Butare and Kigali and completely defeating the genocidal government forces. The diary of Minister Edouard KAREMERA shows that on July 1, 1994, a meeting of the Cabinet of Ministers was convened under the chairmanship of the Prime Minister Jean KAMBANDA to assess the situation. One of their concerns was their faded confidence and hope that the French troops in Operation Turquoise openly would help them fight the RPF-INKOTANYI, but that they did not, so they agreed to send some envoys to Paris as a matter of urgency to talk about the issue at hand.

The KAMBANDA government said at the meeting that the reason why the French did not support it as much as it wanted, could be due to the weakness that the French found on the side of the criminal government in terms of losing the fight against the RPF-INKOTANYI and the fact that they had committed killings. At the government meeting, they said that the French are saddened by the ongoing defeat of the KAMBANDA government across the country, and that there is no hope of re-occupying parts already captured by the RPF-INKOTANYI. The Government of KAMBANDA has decided to do its best to show the French that its troops were capable of winning the war: “It is up to us to show that, as a Government, we are driven by the will to do so despite the difficult positions we have on the military and diplomatic fronts”.

At the meeting, the Government of KAMBANDA decided to prepare a letterrequesting specific support from France and submit it through the military command of Operation Turquoise. However, the government had found that its image abroad was so bad and it was determined to produce articles that reflect its positive image, disseminate them in the international media, and the KAMBANDA government would determine the amount of money to be paid to those who would publish such articles. They also agreed to consider the matter in their daily Government meeting.

The government had also decided to send a message to all Prefects, urging them to hide the evidence of their role in the Genocide, including the non-disclosure of guns and grenades used in the Genocide and to reduce the number of roadblocks, leaving only the most important ones: “The document requesting assistance must be officially handed over to Mission Turquoise (…) The news broadcast and images are unfavourable to us. You have to deny it. Refutation must be accompanied by funding. (…) Message to the prefects not to show weapons and grenades. Reduce roadblocks as much as possible and keep only the ones that are reasonable.”

Let us recall that this tactic to disguise the way in which the Genocide against the Tutsi was perpetrated by the KAMBANDA Government forces had been advised by France since May 1994. A report on the mission in Paris on 9-13 May 1994 by Lieutenant Colonel Ephrem RWABALINDA, who had been sent by Rwanda to meet with senior military and political leaders, indicated the following. RWABALINDA had met with General Jean Pierre HUCHON, who was in charge of military cooperation at the French Ministry of Defense (Mission Militaire de cooperation), and validated military support to RWABALINDA, but advised him to improve the image of the Government in the media, and advised him to do everything possible to hide the bodies of people killed in the Genocide.

The KAMBANDA government had also decided to dismantle the Interahamwe and the Impuzamugambi forces and bring them into the military in order to guarantee that these groups never existed. This was a tactic to try to hide the fact that the Government and its Armed Forces had captured civilians and formed them into rebellious groups: “Suppression of militias and their conversion into combat units under the control of the army.” It is a crime punishable by the international treaty established in Geneva, Switzerland on August 9, 1949 concerning the course of the war. Under the treaty, taking civilians for military training and engaging them in killings by the government is a war crime punishable by international law. The KAMBANDA government decided to hide it because it clearly knew that they could be held accountable before international law.

The KAMBANDA Government Meeting of July 1, 1994 also reviewed the status of their fight against the RPF-INKOTANYI and expressed the grief that they were close to losing the Capital City Kigali. They said that almost all parts of Kigali were besieged by the RPF-INKOTANYI, and that the weapons they were hoping to receive had not reached them, as they thought:

“Kigali is completely surrounded. The replenishing does not come at all despite the promises.”

At a government meeting on July 1, 1994, they agreed that the RPF-INKOTANYI forces had the capacity to reach their desired destination in the whole country, and that they were also close to seize the towns of Ruhengeri and Gisenyi. They said nothing about the town of Butare which was also close to being captured by the RPF-INKOTANYI.

According to the Minister of interior, Edouard KAREMERA, he wrote in his diary the reasons for their defeat which were as follows:

–          The conflicts and killings in the country have caused the Government and its troops to lose credibility;

–          Killing and other crimes committed by some government soldiers including theft, rape of girls and women and internal divisionism;

–          The uselessness of their intelligence services;

–          Lack of sufficient weapons and ammunitions as well as medicaments.

These reasons provided by the criminal government show that it had nothing to fight for except to kill Tutsi civilians. If its soldiers really had a real reason to fight the war, they would have committed themselves to the battle and fight the RPF-INKOTANYI army instead of killing innocent Tutsi civilians. Fortunately for Rwanda, despite the fact that the country had lost more than a million people due to the mere fact that they were Tutsi, the genocidal government had been defeated and Rwandans now have the opportunity to rebuild the country.

The genocide against the Tutsi was planned by the government and carried out by its own forces, with the help of some foreign countries. The genocide against the Tutsi was stopped by the RPF-INKOTANYI forces who won the military battle against the criminal government twenty-six years ago (26). There are still so-called politicians like INGABIRE Victoire UMUHOZA, Bernard NTAGANDA, Faustin TWAGIRAMUNGU, Jean-Marie Vianney NDAGIJIMANA and others who are in reality characterized by the Genocide ideology. They have not given up on trying to dive Rwanda back in the darkness. They should know that they have no place in modern Rwanda.

It is also our message to those who manipulate the youth and lead them in the actions of trivialisation and denial of the Genocide against the Tutsi, mislead them in the act of slandering the Rwandan authorities. There are also those who claim to be genocide survivors who are lying so that they can find tricks to spread the Genocide ideology. All of them should feel that the bloodshed in the Genocide against the Tutsi is enough. The vast majority of Rwandans have chosen to be “ONE”. That’s the decent choice to us. (End).